Other 2013 Contenders (in no particular order)

1. Have the first six and a half months of the 2013 year in music felt like two years to anyone else?  I feel like I'm having that nightmare I used to have as a kid--the one where I win the Nickelodeon/Toys "R" Us "Super Toy Run" contest--which was SUPER RAD--only for those jerks running the contest to give me a super tiny shopping cart with wonky wheels and I couldn't get nearly as much as I wanted/deserved--most notably the Transformers and I finished with my tiny shopping cart full of stuff but not enough to have reality meet "the dream"...And that's the first time I've ever talked about my traumatic childhood in this way.  Thanks for listening.  Anyway, that's how I feel about 2013's album releases.  Lots of cool toys.  But there's no way I can fit as many as I'd like in my tiny shopping cart.

3.  The fact that James Murphy (LCD Soundsystem) doesn't want to record music of his own for the time being but would rather use his gifts to instead produce the new Arcade Fire album saddens me on many levels.  It's like finding out that Heath Ledger has come back from the grave, but he's decided to eschew acting for the opportunity to exclusively direct Men In Black sequels.
Posted by Rob at 8:32 AM No comments:

Playlist of the Week: Monday Mix 2

Step 2: Jam into your head until desired effect achieved. A schizophrenic Monday tonic including new music from Arctic Monkeys, Washed Out, Bass Drum of Death, Divine Fits and random visits to the world of 90's rap, 70's Indonesian psychedelic, and the seemingly bottomless well of awesome that is the Go soundtrack.  Let's go for a ride.


iPad, iPhone, and other smart phone users, click here to play the playlist (if you don't have Spotify installed). 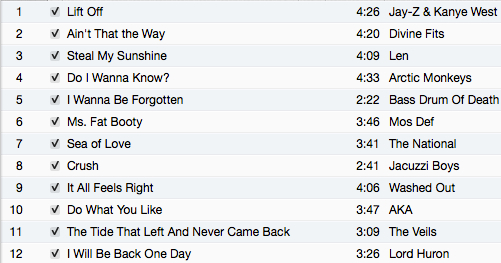