Playlist of the Week: Technical Rockout 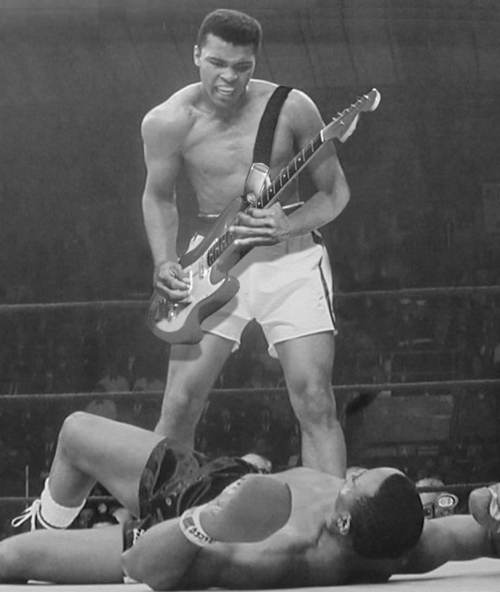 That ringing noise in your head?  That's just the medicine working.

My life is lately quite "cluttered".  And while that sounds like an indictment of my current predicament, I can assure you that I'm (mostly) not a whiny bitch.  "Cluttered" for me is a concoction of happy "problems" requiring my attention, effort, and planning as my life is undergoing some imminent, significant, amazingly positive changes.  Combined with the usual challenges I'm quite accustomed to, (work, travel, money, figuring out the meaning of life or somesuch) I'm left feeling somewhat like a computer that needs to be defragged after a semester in a male college dormitory--all worked up and yet all stopped up.

As the great Damon Albarn once pontificated, "Music is my radar" and it often helps me to detect and translate the world around me--often quite unintentionally.  But the power of music is that is it both a lens as well as a catalyst.  While the former role is often unconsciously executed, I find the latter role to be something I generally initiate.  Simply stated, sometimes--when my head and my heart get cluttered with all that there is to do and will be done--a remedy/reset button in the form of a concentrated dose of heavy rock 'n' roll is quite potent.

Ever since I was a kid pondering the impact of my parents' divorce, my first crush on a girl, and the question of mousse versus styling gel, rock music has been a powerful companion through the wilderness.  This is not to say that "music is all we need" in some sort of hyperbolic, overwrought manner.  Instead, it simply means that when the noise in our heads and hearts gets too much to bear, there are times when we must admit that we can't turn the volume down no matter how hard we try.  Instead, the solution often lies in turning up the volume somewhere else.  Thus, it is impossible to convince me that electric guitars and pounding drums (even with the occasional double kick-stand in play) are anything but a gift from God.  Much like scotch, pizza, and HBO original television, it is a divine medium that is not always done well and should be consumed in reasonable moderation to avoid sickness.

This week's playlist is an example of me getting musically pharmaceutical on your lame ass (and on mine).  I love a wide variety of music genres and styles and can appreciate the lyrically and structurally nuanced examples that are out there to be discovered and consumed.  However, this week is about raw meat.  Loudness.  A little furor.  But don't mistake it for meaningless noise (though there's PLENTY out there right now spanning every genre--much of it ridiculously over-credited and overrated).  This baker's dozen of songs have their share of gut punching and head shots, but also have plenty of skill and organic brilliance.  Having said that, I know that some of you will politely bypass this particular playlist and that's just fine.  But Daddy needs his air drum/guitar time and if you're honest with yourself--you probably need it, too.

The "clutter" of life is rarely eradicated.  But I'm a firm believer that clutter can be pushed out of the way for a few minutes to set up the mic stands, plug in the Fenders, assemble the drum kits, and stack the Marshall amps turned up to 11.  It's all a matter of saying "yes" to clanging the drum sticks together and counting down for ignition.  Take the opportunity to be the master of your noise environment every once in a while.