Playlist of the Week: Februtality


Apologies to the queen and all others who hold themselves in high esteem for my most recent prolonged absence.  I'm all backed up with music to share and I feel a couple weeks behind and it's a fine line between something something "music thought leader" and late to the party.  But that's how I feel and my therapist says that as long as I'm honest about my feelings, your lack of love or appreciation for me is on you or somesuch.  But I digress.

YES, I'm still gonna call this "Playlist of the Week" despite this sometimes being a bi-weekly or monthly feature.  This particular playlist is already about a week or so old and has gone through a name change.  It WAS going to be called "A Dozen Songs for Non-Joners" where I was going to discuss my new favorite derogatory label which follows in the proud lineage of such stalwart gems as "jabroni" and "jamoke".  More on "joner" later, I swear.  Many of you know them.  Some of you may be them.

A dozen songs that I'm going to war/seeking refuge with this week/weekend and a handy guide to what you'll hear (press 'PLAY' now!):

1.  M.I.A. by Black Lips: Some bands who seem to be getting worse with age such as Black Lips are so adjudged because their youthful work was so damned good.  Here is an example of that raw, tingling vitality.  Live.  In Mexico.

2.  Suit & Tie by Justin Timberlake: Nothing close to his elite-level pop best, but his bar is ridiculously high.  So much so that there's a LOT to like about this song beyond just the good feeling of JT being "back".  I've got high hopes for the rest of the album which is coming out later in 2013 based on the quality evident here.

3.  No Destruction by Foxygen: Devotees to this blog will remember the inclusion of Foxygen on my 2012 year in music list.  Already back with new work that--while not as enjoyably disjointed--is tighter, more focused and still more interesting and evocative than 90% of the indie crap parade out these days.

4.  A signature, iconic 90's rock masterwork.  And still fun all these years later.

5. Maximo Park's under-appreciated knack for composing songs full of soft touches that still find a way to rock hard and have balls is not a quality lost on me.  These guys do longing real well.

6.  Another recently discovered rock outfit.  I love everything about Parquet Courts and their tight and catchy brand of pound-a-long bombastica.  I may have just made up that word.  I like it.

8.  Goat is my new favorite thing right now.  It's tribal rock psychelia wizardry.  Australia is on a roll these days.

10.  Broken Social Scene never fails to sneak up on me at just the right moment--the moment where I'd forgotten about their subtly-layered digital beauty.

11.  The Walkmen snuck this track out as a 7" single in November with little to no fanfare.  A genteel little beauty from their recording sessions for 2012's Heaven.  All the things you like about The Walkmen are here in one song. 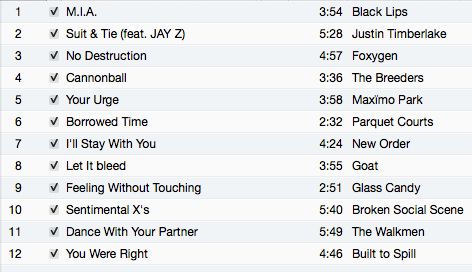