Playlist of the Week: A Dozen Songs for My Future Kids 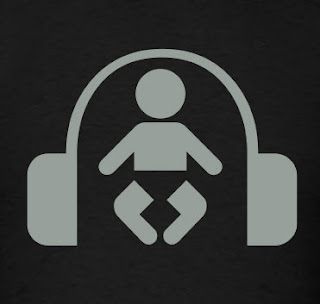 When my kid decides to start his or her own music blog, I think this would make a good logo.  I'm proud already.
Something I rarely discuss with friends--because it usually doesn't fit too well in to "scotch talk"--is my desire to be a dad someday.  In theory, there are several stages one ideally has to reach to become a parent (I said IDEALLY) which include meeting someone, dating someone, marrying someone, knocking someone up, etc.  I'm sure "etc." in this case means "romance", but I digress.
So when you find yourself at something that amounts to "Stage 0", there really isn't much need to either discuss or even spend too much time thinking deeply about the idea of parenthood.  Of course I understand that as a man, there's a decent chance that I feel differently on a fundamental level about this than women my age and in my position do, but it is what it is.  Life is good for me overall and I've got little choice but to focus on what is right in front of me.  A wise outlook, I think.
With all that out of the way, I'm hopeful that I'll get to be a dad someday.  Understanding that that may never happen and that that would be just fine doesn't diminish how genuinely desirous I am of it.  And one of the things I look most forward to sharing with my kid or kids someday is my love for music.  I come from a family of musicians, music educators, and handsome music bloggers (guess who), so this seems natural to me.
Last year, I dated a single mother for the first time and admittedly fell pretty hard for her and her beautiful daughter.  When we were dating, I actually made mother and daughter a playlist of music that was both good (I mean, it is me making this playlist) and also conducive to napping.  I still occasionally use that playlist to nap to myself (it was a highly effective collection).  And while the relationship ultimately didn't work out, the joy I got out of creating a playlist for this little girl I love so much has left me pretty amped about the idea of sharing music with my own kids someday.
This week's playlist isn't really "for kids" in the traditional sense, but I do feel pretty strongly about sharing these songs with my kids at some point.  Music can be so full of joy, wisdom, longing, and humor and I'm certain that these songs will inform my kids as much about their ridiculous father as they do about life in general.  And while there were a ton of potential choices in my collection, I came down to these twelve somehow.  But for good reason (and reasons).  To my future kids--listen closely and listen well.  You'll find--if you haven't by this point--that I know a lot of stuff.  Like a whole lot.
1.  "Crying, Waiting, Hoping" by Buddy Holly   Because...Buddy Holly was my true introduction to great music and this song speaks to what a man, his mind, and a single acoustic guitar can do.
2.  "No Love Lost" by Joy Division   Because...at age 32, your dad loved air drumming/guitaring to this song more than any other.  Visualize it.  Do it.  Yeah, it's pretty rad.
3.  "When Doves Cry" by Prince   Because...it is important to know your limitations in life--and Prince has set a "coolness bar" that you will never reach--but it's okay because no one else besides him can reach it, either.
4.  "Wish the Worst" by Old 97's   Because...At some point or points in life, you are going to feel this way about a guy or girl and I want you to know it's perfectly natural.  Just listen to songs like this, stew appropriately, and move on.  It WILL be alright.
5.  "Monkey Man" by The Rolling Stones   Because...The Rolling Stones are the greatest pure rock band that ever lived.  And this song isn't one of the "hits" you will hear a million times, but it carries no less greatness.  Gems discovered always beat gems delivered.
6.  "Suedehead" by Morrissey   Because...in THIS family, we love Morrissey because I said so.  And because you're at least partly Latino and science tells us that you're genetically predisposed to loving him.  Don't fight it.
7.  "Surf Wax America" by Weezer   Because...you should make time for well-crafted, non-cynical, non-angsty, full of childlike wonder rock music from time to time.  And because this band WAS really great when your dad was in middle school.
8.  "Pyramid Song" by Radiohead   Because...no song makes your dad feel closer to God's love than this song.  I hope it does the same for you.
9.  "Unity" by Operation Ivy   Because...when I heard this song for the first time as a young man, I realized I could truly care about big things and that that was okay.  And to remind you not to let anyone tell you you're too young to care about big things.  And to remind you that we all need a little loud punk rock from time to time.
10.  "FutureSex/LoveSound" by Justin Timberlake   Because...everyone has guilty pleasures and that's perfectly fine.  Don't let anyone try to convince you otherwise.
11.  "Stuck Between Stations" by The Hold Steady   Because...the nuggets of wisdom to rock ratio is off the charts here.  Listen.  Learn.  And listen some more.
12.  "Track 4" by Sigur Ros   Because...even if you don't understand the words, some music is still so great that it doesn't matter.  Keep your mind open to "getting it". 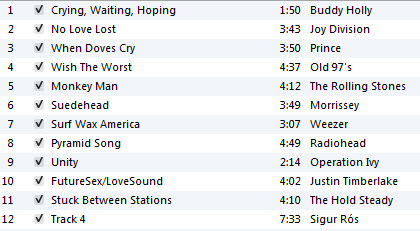 iPad and iPhone users, click here to play the playlist.
No Spotifty playlist this week since they are missing tracks.  You'll survive--I just know it.
Posted by Rob at 8:56 PM