Playlist of the Week: Genexistence 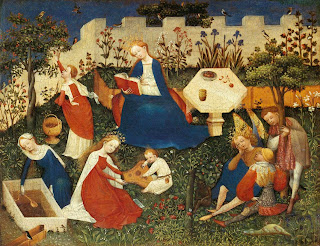 After all the promises and resolutions are made, we get back to reading our books, listening to our music, and talking about the same old crap.  Not that there's anything wrong with that.
10:58 PM, Nashville, TN
While laying (or lying or while being lain or something) in the bed of my overpriced, but unquestionably hip boutique hotel room on the final night of a business trip, I'm feeling both artfully confident and annoyingly reflective on the subject of life and the beginning of the new year. And as such, I had this thought: There's nothing we do with more consistency and fervor on an annual basis than convince ourselves that we're starting over.
In my own life, I've attempted to buck this trend by renaming my practice of making "resolutions" to setting "goals" with a clear "plan" which is all part of a "life mission" that is not at all "lame".
What is this goal/life mission?  I'm not gonna tell you.  Because my life is not some bit for me to present to you for judgment--and if I'm being honest, I like the strategic advantage of telling you nothing (as if you care).  Because that way, if I fail, you'll never know.  Plausible deniability--whether we call it that or not--is a big player with my generation.
Anyway, other than my one little "project" I've got going, I'm abandoning the silly ruse that I'm going to make huge, sweeping changes to my life--other than possibly reducing my rate of "air quote" utilization.  Besides, as I've said in this space several times, life won't wait.  The natural evolution of things is probably going to change things plenty for you whether you download a fitness app or eat less sugar or some such.  Instead, I say screw trying to make over your entire life.  Instead, embrace the life and the situation you have and try to improve it.  It's much easier to improve than to destroy and start over--as if your lame ass could do that even if you wanted to.
So enjoy this good strong (think "STRAWNG") first playlist of 2012 composed with my favorite chemistry in mind.  A little new combined with a little "new to you".  The only possible exception is the inclusion of The Cure's "In Between Days".  But you'd be shocked at how many new friends of mine are so music deficient that The Cure represents a completely new musical experience for them.  I'm almost envious.  Besides, it's just a good song.  And I really have no other reason than that to include it and I heard it again recently and I love it and that's the way love goes (as the great Janet Jackson once said).
So go on.  Take them on, on your own.  Take what you've got, make it a little better each day, read your books, watch your shows (or your "stories" as my grandmother used to say), try to "out-clever" your friends via status update and do what you do for ME best--love me and my blog and my music so hard it hurts.  And if while doing that, you have the opportunity to do something positive for someone else--even a tiny little something like paying an unsolicited compliment, calling to ask them how their life is going, or introducing them to my great music taste--know that such an effort is rewarding.  At least I read that on some Facebook status update that I was supposed to copy and pass along but never did.  But it sounded about right.  So I'm gonna say that I got a good vibe from it and just run with it.
Having trouble figuring out the best way to say goodnight so I think I'll 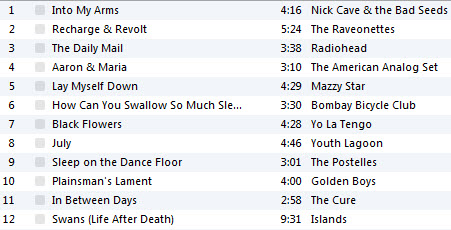 iPad and iPhone users, click here to play the playlist.
To listen to this playlist in Spotify, click here.

Everyone else, press the play button in the box below.
Playlist of the Week: Genexistence from RobRobRiot on 8tracks.
Posted by Rob at 9:23 PM