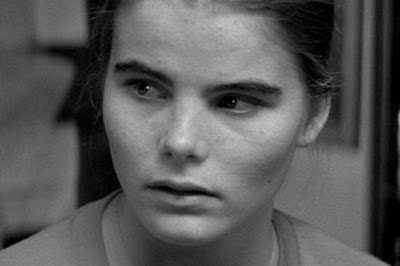 We all have our favorites.  And we all have our reasons.
One of the great music influences of my life was my ex-best friend/fiancee, Leslie (And just to clarify, that is NOT a photo of her above.  That's a famous actress in a famous role.)

Even though we haven't seen or spoken to one another in six years, her presence looms large in my record collection and in my musical heart.  She introduced me to Morrissey, The Smiths, Juliana Hatfield, Evan Dando, Matthew Sweet and so much more.  Music meant something to us.  We prided ourselves on that fact.  And we bragged to one another about how much better our collective taste was than others in an arrogant but truly awesome manner.  And I loved this about us and I know she did, too.  After a rough period in our lives where we didn't speak for several months, it was her listening to Ryan Adams's Gold and breaking down in tears due to how much it reminded her of me, that ultimately prompted her to seek me out again (I'm sure there were other reasons, but this one is my favorite).  My first ever Wilco concert was with her.  One of our most legendary fights (of which there were many) took place right before seeing Old 97's perform at The Gypsy Tea Room in Dallas.  We saw Phantom Planet, Juliana Hatfield, The Decemberists, Okkervil River, Ben Kweller (and more that I'm sure I'm forgetting) in concert together.

No matter what difficulties we ultimately had (and there were many), I've always felt that she was my musical soul mate and I've often wondered if that was one of the reasons it was so hard to leave her behind after our break-up.  I mean, as I've detailed extensively before, music is one of the primary tools we use to "get over" the last person we're with.  And I'll be honest--like many men my age, Ryan Adams is a central component to any break-up therapy playlist and I must have listened to Heartbreaker about ten thousand times after we were finished.  Around 2005 when the relationship ended, I'd say that at least a quarter (if not more) of my music collection was connected to Leslie in some way in my mind.  Finding solace or an escape from the memory of Leslie in the form of music was a nearly impossible task.  The moral of the story?  Don't fall in love with women who have great taste in music.  Just kidding.  Sort of.

So why the sudden trip down bad memory lane?  Because Leslie taught me something about experiencing music that I'm sure she's probably forgotten by now but that really stuck with me.  Once, when presenting me with a gift of several Juliana Hatfield CDs, I asked her which one was the best.  She pointed to one and said that it was probably the best, but then pointed to another and said that it was her favorite.

My brain started to power down at that moment in utter confusion.  "What's the difference between the 'best' and your 'favorite'?", I protested.  And I'll never forget this part.  She looked me in that "this is so obvious and I don't get how YOU don't get this" way that only Leslie could and said (and I'm doing my best to get this right), "Well, this one is her best album, but this is the one I like the most.  It's my favorite."

After several more minutes of discussion on the subject, I left the booth at IHOP that evening no closer to comprehending what she truly meant and I'm quite sure she thought I was completely dense (though I suspect she thought that long before that moment).  Years later, however, I've started to understand.  In 2011, we live in a significantly more "connected" and opinion producing at the speed of light culture and list-making/ranking has become a sport.  You undoubtedly have seen a plethora of year-end best of lists that rank albums, songs, videos, books, movies, TV shows, etc.  Rarely, if ever anymore, do we consider how ludicrous it is to attempt to objectively quantify art in such a way.  I think Leslie always got this.  This album is probably the best in terms of technical proficiency or critical acclaim, but that album is my favorite for my own damn reasons that are mine.  In this way, Leslie was a rad chick and ahead of her time as far as I'm concerned.  At least she was way ahead of me and my overly cerebral approach to music evaluation.  Because ultimately, art, in general, and music, in particular, is all about what it does to your guts and your heart.  We can make it in to more, but we do so at the peril of its fundamental magic.

Picking my favorite songs in a given year is now all about favorite and nothing else.  Every one of these songs made me feel something that I could tell you about but won't.  Some reminded me of people I know, have known but don't anymore, or anticipation of situations and personalities I have yet to encounter.  And some make me just want to move, groove, bang my head, or air drum myself into oblivion.  This isn't to say that some of these songs aren't on some other person's ranked list who is attempting to assign a place for a given track in the schema of our pop culture age that they're trying to cleverly name and inform all of us lesser beings of.  I just don't have the stomach for over-thinking and analyzing each note and lyric anymore.  I just love these songs for my own damn reasons that are mine.  Enjoy.  Or don't.  It's really alright either way. 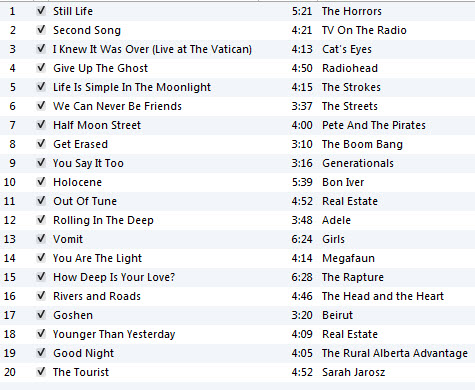 iPad and iPhone users, click here to play the playlist.
To listen to this playlist in Spotify, click here. *
*Track 3, "I Knew It Was Over (Live at the Vatican)" is not available on Spotify but is heartbreakingly beautiful and you must hear it.  Use either of the other two playlist options including the embedded player to hear it.  You'll thank me later, I swear.
Posted by Rob at 10:51 AM