Playlist of the Week: Archery 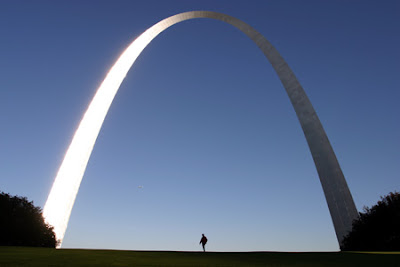 Sometimes, it seems alien to you--even when you know it isn't.

A dozen songs for your Friday, your weekend, your heart, your brain, your distraction, your pain, your joy, your travel.  I'm done traveling for a few days.  You'll never guess where I've been.

A dozen sentences on the playlist you're about to indulge in for the dozen or so of you who may read this.  Track by track.  Oh yeah, go ahead and scroll down to the bottom of the post and press the play button to maximize your enjoyment quotient:

1.  Every time I hear this song, I think of this scene from Superbad that never fails to put a big, dumb smile on my big, dumb face.

2.  I may or may not be practicing my super sweet dance moves to this song.

3.  I may have said this before, but I think Blind Pilot sounds like what people wish Death Cab for Cutie actually sounded like.

4.  Based on a conversation I had earlier this week, I do indeed think that it's great when English bands actually sound English.

5.  I'm late to the party, but there still appears to be plenty left for me to drink.

6.  As a man of faith, I'm naturally inclined to enjoy examples of resurrection (and may oddly explain why I love zombie movies so much)--which in music may just be a glorious return from mediocrity.

7.  Jake, there's nothing wrong with enjoying some occasional strong chick-folk and recommending it to your friends--no matter what they say.

8.  Her real name is Annie Clark and she's far too hot to have such a confusing stage name.

9.  This song comes from an album called Music to Make Love to Your Old Lady By and so this song must be actually promoting healthy, marital love, right?

10.  The title of this song prompted a Wikipedia search and now I've got one more weapon in my future Jeopardy! arsenal. 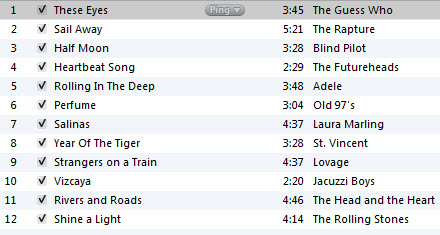 Live on Jimmy Fallon last night. Infectious, fun, tap-your-feet pop the way it was meant to be made. Loved this the first time I heard it. Side note: How much does Girls' front man Christopher Owens look like Kurt Cobain with that sweater/hair combination?
Posted by Rob at 4:38 AM No comments: 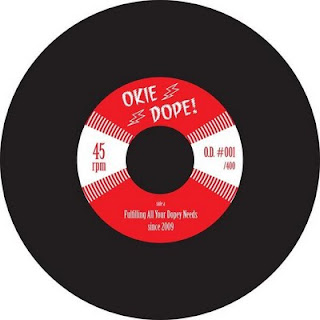 Not just a figment of our wild imagination anymore?


1.  Okie Dope Records has existed in the heads of myself and my label partner and friend Clint for two years as nothing more than a single t-shirt, a few cool JPEGs, and a Facebook page.  What better way to celebrate the two year anniversary of our hypothetical venture than by actually making into something....thetical? Or real or non-fictional or um...an actual record label that makes an actual record!  Well the wheels of progress and the gears of justice seem to finally be moving in the right direction.  More details will follow, but we've found two great Oklahoma City bands who will each share a side of a 7" release (a 45 RPM record like the one pictured above).  As of today, we're projecting a late November/early December release of the Okie Dope label's first record!  Things should become official in the coming weeks, but until then, let's all celebrate the fact that your beloved music blogger is taking his first steps toward realizing that sweet clean Jay-Z music mogul dream...

2.  According to Blogger Stats, the most popular post in the history of this blog BY FAR is one of my playlist of the week posts--"My Mental Trans-Am".  And while I'd love to believe that this is due to the exceptional writing and fine, hand-crafted playlist authoring that I did on this occasion, I'm thinking it has to do with the words "Trans-Am" and people who are inadvertently stumbling on to my blog while cruising for muscle cars online.  On an unrelated note, future music playlist titles will incorporate "American Idol", "Kate Middleton", and "Arrested Development Movie Release Date".

Yes, I have a ton of catching up to do on this front and a couple of these are from previous weeks, but I don't want you to miss out on them just because I'm a bad blog parent... 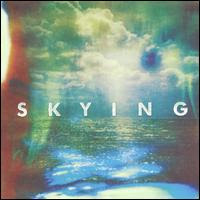 Skying by The Horrors: A somewhat sunnier and slightly more 80's New Wave-esque pop-friendly turn from 2009's dark masterwork, Primary Colours, The Horrors return on this album with no less stomach for the fight.  Don't let the name of the band scare you off--this is synth-drenched music with rock 'n' roll power, principles, and guitars done right.  Download my favorite track on the album, "Still Life", for free here.  You'll dig.

For fans of: Echo & The Bunnymen, The Big Pink, Simple Minds 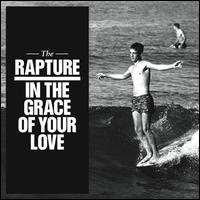 In the Grace Of Your Love by The Rapture: Triumphant, highly-contagious dance-punk from the painfully un-prolific (this is only third third album since 2003) NYC pioneers of the craft returns in full force.  Less "punk/tribal" than 2003's essential Echoes and less "shiny/produced" than 2006's often overlooked Pieces of the People We Love, this album finds a happy medium between the two without feeling compromised.  The beats and the melodies are infectious and the lyrics are bravely sincere (and apparently un-ironic by all accounts) and fit with the tone of the record.  I cannot stop listening to this album and I suspect it will find its way on to many year end best of lists--namely mine. 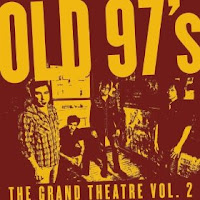 The Grand Theatre Vol. 2 by Old 97's: The most surprising album of 2011 so far from the standpoint that this is easily the best album this Dallas alt-country/country rock institution has released in a decade.  I've loved this band since my college years and I'll have to admit that I'd given up on the idea that they could once again make music that lived up to their early classics.  Some bands just keep going well past their relevance and I feared that Old 97's had been relegated to some adolescent-tinged nostalgic place alongside bands like Weezer.  But this album is a true return to form and its mood and feel is reminiscent of their work on 1999's excellent Fight Songs.  At their best, Old 97's combine the best elements of rock and country with an effortless artistry that has rarely been matched and it is great to see that they've got some magic left.

For fans of: Drive-By Truckers, Bobby Bare, Jr., early Wilco
Posted by Rob at 10:42 AM No comments: