Playlist of the Week: Scalabitual 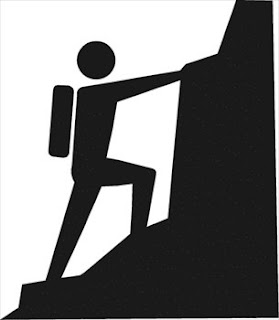 Music first.  The conquering of the world will follow soon after.
scalability--

I think it's called jargon.  Some kind of industry or trade specific language.  Yeah, that's what you call these kind of words.  I had never heard this particular word until I got this job.  And now I use it all the time in presentations (like big shots do) as both an adjective of praise for my solution or as a weapon against a competitor.  In my little professional world, the ability to handle an increasing amount of demand is the skeleton key more often than not.  Which I suppose is true in the rest of my life as well.

I don't talk about work to my friends and family much--other than to let them know I'm traveling or if I've had some sort of success I'm proud of (99% of my friends and family could not tell me what I actually do for a living, which is fine).  And I likely do the latter just to remind them that, in fact, I am not sitting at home with no pants on working the margarita machine.  That often.  No, no, I am a hard worker.  I am highly scalable.  I work, I travel, I write, I socialize, I attend church, I remember birthdays, I eat local, I sometimes cook, I evaluate music so you don't have to--I mean, there's a workload called life to be conquered and I generally rock it.

But lately, some other factors have been added to the mix.  Ones with tremendous growth potential (excuse how corporate douche that sounded), but ones that will potentially stretch my scalability.  With software systems, there's a point at which a given solution reaches its workload limit.  You can add more tasks, but all the other ones will either suffer in terms of performance or will need to be shed or modified to fulfill the new demands properly.  Technology is amazing, but I find that at its core it is bound by the same principles as the rest of humanity in most ways.  At some point, we realize that there's only 100% to give and it all comes down to choices.

But this is a good thing.  The forced application of prioritization in ones life is the ultimate litmus test for your values.  And not mentioned in my previous list is how much of my life's pie chart is probably filled with a significant amount of wasted time.  The idea of replacing that wasted time with--in the simplest terms--the "important stuff" is exciting beyond words.  As age moves us to the summit of activity, the mandate to take it all on never becomes less demanding.  And it would be easy and idealistic for me to say that I'd rather be great at a few things than mediocre at many things--as if life gives us such a choice all that often....I had another good thought but then Terence Trent D'arby just came on.  Hell yes!  Make fun all you want, but you cannot listen to this song and not nod your head.  That's science.  Me?  I'm about to dance.  Do I have pants on right now?  Don't worry about that.  Be right back.

Man, I feel good!  This is why it's a good idea to play the playlist while I write/while you read.  So anyway, we don't usually get the luxury of getting to focus on just a few things.  I'm going to eventually be a husband and a father but I'll still have a job and interests and others to engage with and I really, really do want to try and still eat local.  The key to scalability being an actual advantage is knowing how to balance and prioritize.  And since we rarely get practice runs at this, we have to just take what we've learned, close our eyes, and hope we can do it.  The time isn't here yet for the big stuff.  But it'll be here soon enough.  I have faith that I can handle it.  And even more faith that even with all the change and adjustments, that I'll love it.  It's just how I was designed.  That's not just the Terence Trent D'arby dance high talking.  I think I really mean it.

This week's playlist is one of the best of the year--if I do say so myself and I do since this is my blog and my taste is excellent.  But seriously, unlike recent years, 2011 seems to be strengthening down the stretch in terms of quality.  So there's plenty of new included in all this goody goodness.

1.  Track 1: Yes, Beirut was recently on this playlist, I know.  But their new album, The Rip Tide, was just released and has quickly become a contender for me.  The usual layers of horns and eastern European tone are complimented with a more pop-friendly and gentle feel.  God, that sounded hipster.  But trust me, it's a really good album.

2.  Track 5: Don't let the title fool you--and I suspect that in some ways it IS meant to throw you off--this is the most sweeping, affecting pure rock song I've heard in years.  Power.  Just power.  Just trust me.

3.  Track 7: The Horrors are awesome.  And they just keep getting awesomer.  The new album, Skying, is a more pop-friendly continuation of 2009's darker, post-punk epic, Primary Colours.  Both albums are great, but I think first-timers to this band will enjoy Skying the most.

4.  Track 12: A folky, somewhat bluegrassy cover of one of my favorite Radiohead songs of all time.  A tall order--but maybe the best Radiohead cover I've ever heard.  It takes balls to try to cover Radiohead--and apparently Sarah Jarosz has them.  But I'm sure she's still a lovely lady. 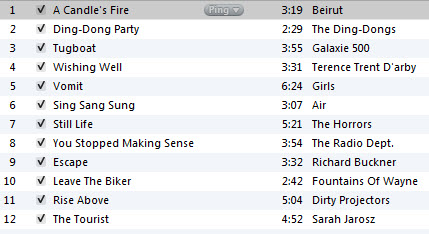