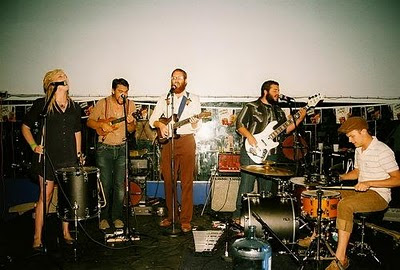 This is Seryn--which I think is Spanish for "Rob's favorite new band".  Oh wait, that's ridiculous.  I meant "Roberto", of course.
Greetings from St. Pete Beach, Florida.  To answer the question I'm sure you're asking, the answer is yes.  I did go to the beach.  Nothing worse than going to the beach and being unable to jump in the ocean on a beautiful day.  So I guess I'll blog instead.  Yeah, that's just as good.
1.  So I've been quietly whipping my friends for the last week or so about this band--Denton's very own Seryn (hit play above).  It's like someone took Fleet Foxes' vocal harmonies, mixed it with The Dodos penchant for hard-charging precision percussion, and added in a heap of unadulterated Ra Ra Riot-esque string-heavy passion.  And they do it with five members who all take lead vocal duties at any given time.  iTunes allows for you to select a genre for any album you import and I just have a hard time picking one.  Maybe I'll create one called "Dodoriotfox".  Look, I'm not saying this band is creating a style of sound we've never heard before--I'm just saying that they've taken their influences and merged them better than any band I've heard in a long time.  And damn if their sincerity doesn't come pouring out of the speakers.  They mean this and it sounds important to them that you to know that--as long as you still have a good time listening.  And I think you will.

2.  This blog now has a Facebook page.  Click here to go to it.  Why did I decide to create a page?  A couple reasons.   Part of it has to do with growth.  A public page makes it easier to spread the message (I'm kind of a disciple) of good music.  And wouldn't the world be better with more influence from me?  Some questions answers themselves.  Logistically, it makes sense to have a page so that I can post my blog entry--but also because it's easier to post random links to great music without having to devote a blog each time I want to share some gold with you.  Finally, I just think it's cool in some way.  In short, you're welcome.

This Is Where We Are by Seryn: For all the reasons stated above.  This band creates movements as much as actual songs.  The album is rich and rewarding but never a burden.  This album is a joy to listen to and a strong early contender in my best of 2011 list.
No Color by The Dodos: Their new album sees a return to the leaner, more muscular sound of the highly-acclaimed Visiter.  While I their last album Time to Die seemed to get a raw deal from critics, I have to admit that No Color's sharper edges make for a more compelling listen.  Great beats, great time signatures, great energy--you'll dig some melodic rock that embraces a good pounding.
A Thing Called Love by Johnny Cash: There is nothing I can say about Johnny Cash that hasn't already been said.  If I have to tell you who Johnny Cash is, well...well I'd say you're like those people who actually need the flight attendant to explain how the seat-belt works.  Anyway, this chick I know found this old record while out shopping and gifted it to me--which was pretty great.  I'd never heard any of these Cash songs before, but found them to be absolutely classic and gorgeous.  We all know the "hits", but it is often these forgotten gems that distinguish the greats from the legends.
From St. Pete's Beach, Florida, I bid you goodnight.  The beach and the beers have made me....yaaaaaawwwwn....
Posted by Rob at 8:16 PM