Playlist of the Week: Illusioneering


I am not an assassin.  Seriously.

A while back, a friend of mine noted my seemingly never-ending string of 24-36 hour business trips and formed a hypothesis:  That I am a covert assassin.

My response?  That it's totally understandable how you could look at me, consider my intelligence, agility, and details-oriented modus operandi and think I have what it takes to be an extremely effective hired killer .  But alas, while my travel schedule and general awesomeness mirrors that of a James Bond-esque agent of style and calculated mayhem, I am still just a plain ol' technology sales consultant a la Schwarzenegger in True Lies.  (see what I did there?)

I am a man of many layers.  I am a somewhat successful professional.  I'm now a part-time concert promoter.  I'm even the co-founder of a record label.  Sure, we haven't put out a record yet, but don't worry about that.  I mean, I'm pretty much exactly like Jay-Z if you ignore a few scant details regarding money, fame, power, and a hot wife.  Yeah I'm pretty close on this one.

From afar, my life may appear to be more or less interesting to others depending on who you talk to.  When the movie Up in the Air came out, many (hundreds, possibly thousands) of friends asked if the film was an accurate reflection of life for a man on a seemingly endless business trip around America's airports and hotels.  "What a ridiculous question," I said.  "My life is WAY more kickass than George Clooney's in that movie."  Other than the fact that my airline status is slightly lower than his character's and other than the fact that I may or may not stumble in to as much random sex with hot women...and there's a slight chance I may not be quite as handsome or charming as George Clooney--a panel of scientists in Stockholm are supposed to deliver some results to me soon--I have it ALL over the guy in that movie.

I mean, did George Clooney get to drive a 2011--not a 2010, mind you--Ford Fusion around northern Tennessee for two days last week or get to tell the story of his broken wrist dozens of times to semi-attractive flight attendants like Christopher from Delta Airlines?  I think not.  But that's okay.  Not everyone can have my high grade, full throttle life and I will just have to keep Mr. Clooney in my prayers.

I am a man of many layers with very few people who know exactly who I am and what that means.  And that's fine.  While most people in this world are adamant about making sure that everyone knows the real them or the Facebook/Twitter version of themselves that seems to be perpetually witty, topical, and well-adjusted, I've become more comfortable with abandoning the bit as time has gone by.  I mean sure, there are people who think that about me.  But there are also people and even friends who think I'm kind of a prick and others that think I'm a really nice guy or who think I have an adventurous life or a boring "corporate" life or a lonely life or no life.  Let's just say that over the years, managing your own PR campaign becomes exhausting.  So who am I?  Well, if you even care to know, I'm sure whatever you think is probably right.  And whatever I think of you is insightful and accurate since I'm so smart.

I'm a man of many layers, but also probably very few in a lot of ways.  What's important is I know myself and like you, I alternate between liking and disliking, loving and hating me.  Is there a nice neat answer to the question of  who I am?  The answer is YES and I know it and I have it written down somewhere or hanging on my fridge at home.  But I'll never tell, just as I'm sure you wouldn't really tell me.  I mean, what fun would that be?

Enjoy this week's music.  I've got another operation/trip/mission/presentation to plan. 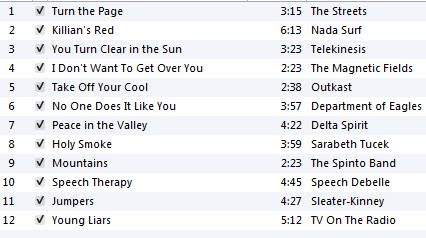