Playlist of the Week: Blue Ash

Live from CVG after a week in Blue Ash, OH. Go ahead and scroll down and hit play. Beginning to think these instructions serve to enhance your reading experience so hard. I'll wait.

Today, I am dangerously low on profundity (yeah, I used that word). But luckily for you, I'm high on music enthusiasm for a couple reasons:

1.  Based on blog stats, last week's playlist entry is my most popular playlist in the blog's extremely modest history.  Great job, internet!  While I certainly enjoy the twisted metaphorical roads I choose to navigate in this space, I know that the unifying concept is always the music and how awesome I am for choosing it.

2.  So much great new music has come to my divided attention lately, even I have a hard time messing up a playlist these days.

So a dozen random/unconventional thoughts/observations for/of this week's dozen tunes, track by track:

1.   If his voice sounds familiar, it should.  Julian Plenti is the solo side project of Interpol's lead singer--who isn't actually named Julian Plenti.

2.  This song embodies the concept that if your band--in this case The Rapture--is gonna peak early, peak LEGENDARY.  Even if it's only just the one song.  Sidenote: Awesome use of song and scene in The Rules of Attraction.

3.  I think there's some law concerning interstate commerce that says a new Strokes song is required on all internet playlists this week.

4.  I like Beach Fossils--especially their name.  They adopted the Fight Club naming convention/philosophy.  But please, please talk about Beach Fossils.

5.  I know I just put The Streets on a playlist a few weeks ago.  But it's a new song from a newly-released album.  So there.  I mean, get your own music blog.  Jerk.

6.  I love PJ Harvey for her music.  But I'll also always love and remember her for this picture.  Sigh...  Sidenote: Guy sitting next to me in airport just looked over at my computer when I pulled that picture up either in awe or in judgement or likely a combination of both.

7.  The next movie about a young and promising band that met a tragic end before their time should be made about these guys.  And I should play their wacky, hard-partying, fun-loving manager--whether that guy existed or not.

8.  See #5 and replace "The Streets" with "The National".  And that especially goes for YOU.  Yeah, you know who you are.

9.  I kinda hate these guys sometimes--but they make a song like this just enough to keep me coming back.  Some analogy regarding a bad girlfriend who is also really hot that I can't quite form at this moment could be inserted here.  Let me know if you come up with something good.

10.  Johnny gets it.  Especially about the way that sometimes we just don't get it.

11.  Tied for my favorite song title that also serves as a statement of universal truth.  The other?  "Truth Doesn't Make a Noise" by The White Stripes.

12.  Seryn will be huge--a similar statement to the one I made regarding The Head and the Heart recently.  I plan to see them in a couple weeks while the gettin' is good.  Don't believe me?  Check out #1 on this SXSW recap by Paste Magazine.  Sidenote: I occasionally pronounce "huge" as "yooge" just to keep things interesting.  Try it.  "I have a yooge crush on Rob and his super rad music blog."  Yes, you have to say the whole sentence just like that.  Hey, I don't make the rules.  It's science. 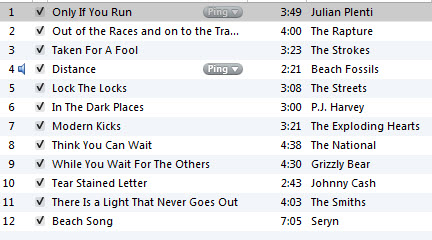