Creating Something Out of Nobunny 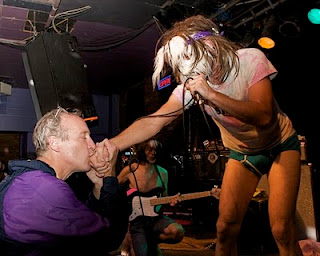 If receiving a gracious kiss on the hand by a creepy old guy while you perform music with a bunny mask on sans pants isn't the definition of the rock 'n' roll dream, I don't know what is.
There are few oft-repeated adages that offend me more than "Those that can, do; those who can't, teach."  I come from a family full of teachers and educators whose contributions to the lives of their students on a variety of intangible levels is almost certainly immeasurable.  But I do lend some credence to the idea that those who can't perform music become music critics.  And maybe in our current generation, a step down from the traditional music critic is the music blogger.  Like me.  Oh man, the word "blogger" just made me sicker than usual just now.
Anyway,  I accept this critique with little problem for two key reasons:
1.  Most music critics and bloggers these days are pretentious to the point of absurdity.
2.  And while sometimes guilty of #1, I don't take myself or this blog very seriously as a rule.  This has always been a vessel of distracting catharsis for me and has lately become a place to indulge my love of creating "mixtapes".  Only with technology today, I can create a mix just for you.  And you.  And most ESPECIALLY you.  But not so much you anymore.  Get it?  Got it? Good.
Having said all of that, I've decided to get in to the "creation business" when it comes to the music I hold so near and dear to my heart.  Simply stated, my friends and I are putting on a rock show.  And since you can't make that simple statement without it somehow implying that I'm gonna thrash a guitar or double kick-drum some poor audience in to oblivion, let me be clearer: My friends and I have managed to seek out and book one of our favorite rock acts--Oakland, California and Goner Records' own Nobunny--to perform a show here in Oklahoma City and we're investing our own money, time, and effort to make this happen.  Creation.
I wrote last summer about seeing Nobunny perform here in Oklahoma City and what an absolutely fun and raucous party experience it was for those who were there.  Does the guy have bits?  Sure.  He wears a bunny mask and keeps the details of his true identity largely hidden, but the music is pure rock 'n' roll indulgence.  But the "fun" has definite substance as the guy is an incredible songwriter.  His track "Live It Up" which was featured in one of my previous playlists, is worth a listen and speaks to me as a man on quite a few levels.  And yes, I have more than one level.  At least two.  Maybe three.
The concert was the brainchild of my friend and honorary brother Clint who simply saw that one of his favorite rock acts was touring, skipping our fair burg, and had an open date that he felt would make sense to fill here.  He came to a few of his close friends including Yours Truly who had so thoroughly enjoyed the experience of Nobunny's last Oklahoma City show and asked if we'd be willing to find a way to put our resources and efforts together to make this happen.  And so we're making it happen.  And you should come.  Saturday night, February 19th at The Conservatory.  Probably not your scene Mom, but I know you're proud of your little boy, regardless  Details and ticket info here.
So what's the grand meaning of this all?  I mean, there probably is no reason to take something simple and beautiful like an idea for a rock show put together by yourself and your closest friends and make something grandiose out of it conceptually.  But I will say that--even though the concert hasn't happened yet--I'm proud of myself and my friends for not doing what we all too often are guilty of doing.  You know what I mean--sitting around, bitching about something (like one of your favorite bands skipping your hometown--it cuts like a knife, sometimes) without a willingness to do anything about it.  Like people who complain about politics but don't vote.  Screw them.  We didn't sit around and wait for others to make something we wanted to happen. WE made it happen.  And I don't do that nearly enough.  I feel emboldened.  Empowered.  And I hope that I can translate this philosophy--nay, this conviction--in to all areas of my life.  You've all been warned.  The stupid music jerk blogger is now part of the process as opposed to just being a spectator.  Because who wants to be a spectator in their own life anyway?  Not me.  So that is my passionate plea to you my friends.  Life won't wait.  Go forth and conquer the seemingly unconquerable with an iron will and an unquenchable thirst for greatness.  Just make sure to buy tickets to our show first.
"There’s gotta be more to this life than “Go to school, get a job, take a wife, ain’t it nice?”…I’m gonna try to live it up.  I ain’t giving up.  I’m gonna get what’s mine.  Ain’t gonna waste my time.  I’m gonna see the world.  I’m gonna talk to that girl.  I’m gonna do it right.  I’m gonna start tonight."