Playlist of the Week: Winterlifer 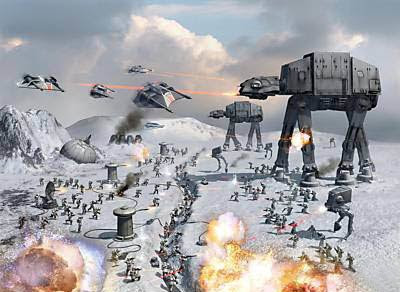 I'm not gonna lie.  The idea of winter--like many other things--sure seemed a lot more fun when I was a kid.

I've always been fascinated by the way that people who listen to music seem much more inclined to listen to what FITS their mood rather than what might ALTER their mood.  This is not an original or groundbreaking observation on my part, but it intrigues me nonetheless.  When we're sad and brokenhearted, do we listen to classic happy music like The Beach Boys' "Surfin' USA" or Digital Underground's complex, joyous masterpiece "The Humpty Dance"?  I mean, that would make sense on so many levels (do you all realize the lyrical genius of "The Humpty Dance"?), but yet most of us resort to finding some sad bastard music that spins a tale of even more gut-wrenching misery than we're currently feeling.  But why?  So we somehow feel better in comparison?  I used to think that that might be the case, but it is rare that listening to sad music when I'm sad has any positive effect other than to increase the likelihood that I bust out the scotch a little earlier in the evening.  And apparently "conventional therapy" claims that that is also not considered a "positive effect".  Oh well, I'll leave that to the experts.

Either way, I've been in love three times in my life and there was an album for each of those breakups/disappointments I dove in to shortly thereafter for an extended period of time and I'm pretty sure none of this music would be sanctioned by the APA.

1996: Pinkerton by Weezer: Great album, but full of heartbreaking teen angst at its finest/worst--widely considered the breakthrough of "emo" music. My God, I was SO emo back then.  Surprised my mom didn't poison my food during this period.

2005: Heartbreaker by Ryan Adams: The title pretty much sums it up.  Luckily, I wasn't living with my mom by this time or she would have definitely poisoned my food.

2010: High Violet by The National: Great album by a great band.  But this is the kind of music that with too much exposure might cause me to do something horrifyingly rash and negative.  Like move back to Dallas.  I've been able to measure my relative recovery based on how much less I listen to this album now compared to a couple months ago.

So we cope how?  By trying to drown our misery in musical misery?  I mean, when we're happy we don't listen to sad music to try and make us less happy.  And why?  Because being happy is the tits, that's why!  So what's up with the sad music?

I find the only other similar music preference correlation I've ever caught on to is what I refer to in my own terms as "winter music" or "cold music".  It's the type of music that may either be the symptom of or solution to the season.  This music either makes me colder or I somehow find warmth in the fact that they REMIND me of cold while it is actually cold outside even though I may actually be somewhere warm listening to this music but all of that is counter-intuitive until I remember the way that it seems completely normal for me to listen to sad music when I'm sad.  You betcha.

Again, there's a dark gray sky out there you wish was like London but is probably more like Cleveland.  A sharp whirl of wind that snaps you awake and yet makes you crave slumber the way bears do.  And for some of us there's snow.  So much snow.  And for most of us, the fun of the snow has gone the way of our childhoods and a belief in Santa Claus and the hope for a kid like me to someday have the chance to fight on the ice planet of Hoth along with Luke Skywalker.  Some songs fit our mood--maybe even reinforce our mood.  Cold songs remind us of what is just beyond that door--all of the frigid elements and the reality that there's very little difference between being one of the lucky ones and being one of the ones stuck out there.  Beach music, warm music, none of it seems that appealing in December and January when there is no logical reason it shouldn't.  But logic eludes us more than we care to admit, eh?

So for you all, a dozen of my winter songs that just make sense for me to wrap myself in this time of year.  Even the ones that warm me up on this list are still unmistakeably songs whose identity is entrenched in the winter for reasons I can't fully explain.  The opening notes of "Everything In Its Right Place" are some of the warmest I've ever heard, but the song remains a winter piece for me.  And maybe, just maybe, it's because that warmth would be wasted on us during the summer, just as the heartbreak of sad music and its mystifying empathetic powers would be wasted on happy listeners.  Maybe the answer is that music, like God or "fate" or destiny gives us what we need when we need it--even when we don't or can't get it. 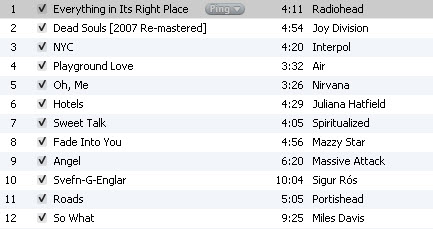