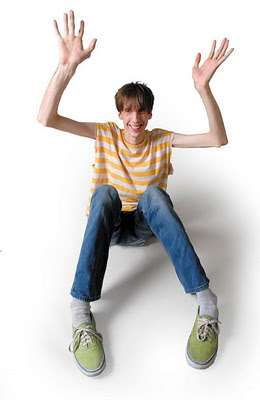 My mom always told me not to judge a book by it's wild-assed, Marfan Syndrome-having, long freaky limbed cover.  And she was right.  Case in point: Bradford Cox.
1.  So I have arrived very late to the whole Deerhunter party.  For those of you reading this who have been listening to Deerhunter and their twisted genius frontman Bradford Cox for some time, you'll agree with this sentiment.  For those of you who are hearing about Deerhunter for the first time at this very moment, let me assure you that you are ridiculously late to the party and everyone already has a huge head start on the drinking and you'll probably never catch up in time and will be expected to just go ahead and volunteer to be the designated driver.  Knowing that, if you still wish to come along for this ride, then best of luck.  In short, Deerhunter is a really, really good and strong to quite strong four-piece from Atlanta.  Their influences are all over the place, but the most apt description I have for them is a noisier Velvet Underground.  But really, there are a lot of sounds in there and I often feel that most comparisons for most bands don't do them justice.  My dear sweet ex always seemed to think that everyone sounded like The Beatles.  I don't really blame her for that since there's some truth to that statement for about 80% of rock bands.  But it does neither the band nor The Beatles any favors.  And yes, I did hyperlink The Beatles in the highly unlikely case that one of you reading actually doesn't know who The Beatles are.  The Beatles.  Which would be sad on many levels.  And another reason the terrorists want us all dead.  Anyway, their latest album, Halcyon Digest, has absolutely captivated me for reasons I can't fully describe.  It haunts and warms me all at once.  For the longest time I avoided Bradford Cox and Deerhunter because I'd seen his spaced out, unfocused, and spastic interviews, heard about his stream-of-consciousness songwriting style, and seen his general appearance (which sometimes includes wearing old dresses on stage)--and made the general conclusion that his music would be as unfocused of a mess as he is.  Well, I just couldn't be more wrong.  Halcyon Digest is focused, beautiful, unique all while retaining a large measure of adventure.  I'm not calling the guy an idiot savant or something (Cox is actually quite intelligent), but his lyrics and composition retain a measure of order and focused brilliance that you wouldn't have expected if you were judging a book by its cover.  Like I did.  Head hanging.  Shoulders shrugging.  Hey, this is one of those times I'm really glad to be wrong.

[Listen to samples of Halcyon Digest here]
2.  I've decided that one of the primary reasons for my relative laziness which leads to the infrequency of updating this blog has to do with Twitter.  Yes, I'm going to shoot the fish in the barrel that is social networking and blame Twitter.  Having an outlet for my all my random musings about music and life and the injustices of the world takes a bit of the piss out my passion for writing this blog.  But I'm going to really try so very much harder because of how obvious you all make it to me that you need this blog.  You need me.  You need...US.  Also, I believe I may have coined a term for the way Twitter makes me lazy the way that weed makes one lazy--Twitterjuana.  I did one Google search and found nothing matching this term, so I'm claiming it for my own based on my exhaustive and thorough research.  Yes, kids.  My legacy on this earth is coining the phrase "Twitterjuana".  Self-doubt creeping in.  Surely someone has already meshed these together.  I mean hell, the word is a veritable "Brangelina".  It's too obvious right?  Right?  Oh, and my Twitter name is @RobRobRiot if you care to try and follow me.  If you must.  (I'm making a stern face of resigned humility at this very moment.)
3.  I would be remiss for failing to mention the "other" show that was a part of the ballyhooed pre-breakup concert weekend of 2010 that I referenced in my previous entry.  In addition to seeing The National, I had the distinct pleasure the night before of seeing Muse at the Ford Center in Oklahoma City.  Muse are a relatively big, famous band who regularly play big arenas and headline big festivals and fill said arenas and festivals with big arena and festival rock music.  For such a "big" band, it might come as a surprise that there are only three guys in the band proper.  But these guys play a mean show with heavy drums and guitars that at times border on metal.  The visuals include huge glowing platforms, big screens showing images focused on each member of the band, and a light show guaranteed to cause an epileptic seizure within about 30 seconds--probably to people who don't even have epilepsy.  Yeah, it's that full throttle.  Now this is not to say that they're all hype and visuals and no substance.  I was thoroughly impressed by the songs, the hooks, and the overall presence of these guys.  Muse is the closest thing we have to a modern day Queen out there and I highly encourage you--if you have the means--well let's just say one of their live shows is so very choice.
4.  And finally, thanks to a recommendation by my good friend Lori, I'm listening as I write these words to a band I'd never heard of until today called Here We Go Magic.  So far, so good.  She said I'd be blown away by these guys.  Now let me tell you, it's typically not a great idea to promise anyone they'll be "blown away" by anyone the first time they hear them.  That's sort of like telling a girl that you're really good in the sack before you've ever had a chance to actually, um, "engage".  You better deliver and you probably won't because the bar has been raised a bit higher than what actually matches the reality of your "skills".  Just sayin'. Anyway, these guys are promising.  On first listen, they remind me of a more focused and less abstract version of Ariel Pink--an artist whose most recent release, Before Today, has already cemented a place on my year-end, best-of 2010 list.  I'll be interested to listen more.  And therefore, I can only assume you will be, too.  Just follow all the above words and links to a place called music bliss.  I triple dog dare you.
That's all for now.  I love you all so hard with the fire of a thousand exploding suns flying in to a great, big huge mega-sun.  Yeah.  That much.
Posted by Rob at 7:22 PM