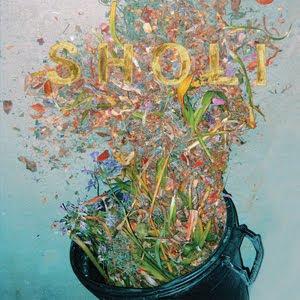 Buy this.  It's not for your wall, despite its looks. It's for your hearing holes.  It'll treat you right.
1.  Check out the album featured in the "swear this is an album cover Yeasayer could be proud of" picture found above.  The album is the self-titled full length debut by a band called Sholi that I can't say I know a ton about but that I know I can't shake.  I may write more about them in the future, but the album is a winner.  A little Velvet Underground-y, a little Grizzly Bear-y, a little Nada Surf-y (it's actually eerie how much the lead singer of Sholi sounds like the lead singer of Nada Surf).  The rare eight song album and it works.  Changes pace often in the same song, interesting musical sound while sticking to some pretty traditional instrumentation.  It's a good good.  Check it out here.

2.  Looking forward more and more to the upcoming Norman Music Festival with each passing day and particularly the performance of the great Dirty Projectors.  Still can't believe this festival is free sometimes--until I realize that aside from a few killer acts, there's a whole lotta spare fillers.  But hey, I'm not looking a gift hipster-douche infested horse in the mouth.  I can fight through it for Dirty Projectors AND I have high hopes for NMF.  It is a true grassroots effort that is continuing to evolve and appears to have a bright future.
3.  Titus Andronicus' excellent new Civil War-themed sophomore album (yep, Civil War-themed) The Monitor is just the tits and it has inspired me to rekindle my love for reading books on the subject.  When I was a kid, I geeked out over books about Lincoln, the war itself, and various biographies of generals complete with a road trip to Vicksburg and a complete viewing of Ken Burns' The Civil War--which I contend remains the greatest documentary ever made.  A prominent historian featured in that documentary was the late, great Shelby Foote.  I'm reading the first of his three volume The Civil War: A Narrative--Fort Sumter to Perryville.  It clocks in at well over 800 pages (and that's just this first volume), but hey, I haven't got much else going on in Texas besides work, so why not?  And Titus Andronicus loves Civil War history, and I love them.  So be cool like Titus Andronicus and get some learn on!
Posted by Rob at 10:26 AM