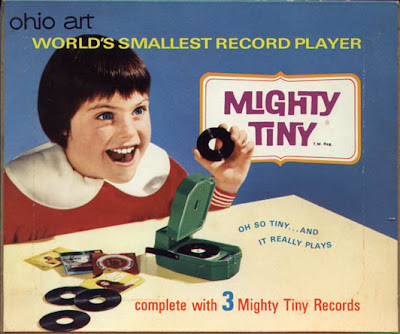 This evil little fucker gets access to his records and I do not.  Now where is the justice in that?
But alas, I return home to Oklahoma City tomorrow where I shall embark upon several music-related activities.  Tomorrow, I'll be attending a concert by one of my all-time favorite bands--Old 97's--at the Wormy Dog Saloon in downtown OKC.  This is the first time they've played in Oklahoma City in over a decade and I've been looking forward to this show for months.  If you've never heard them before, I'd recommend starting with their "best of" compilation, Hit By a Train.  It doesn't have all my favorites, but hey, what "best of" ever does?  It's a good overview of one of the finest rock-country bands to ever walk the face of the earth.  If you're in Oklahoma City tomorrow, come on out.  You'll thank me with sweet kisses later.  Additionally,  I bought some cool bookshelves at IKEA that will actually serve primarily as record shelves and I imagine I'll be spending most of the day Saturday putting those together.  I may go to Home Depot, Bed Bath & Beyond, I don't know.  I don't know if I'll have enough time.
So as I've spent such sweet good important time helping Mom out during "the ordeal", I've had to really, really embrace the MP3, the working out (not as much as I should), the spending time alone, the aforementioned suburban driving tour, etc.  All in all, not a bad experience and one that has given me time to really "spend" with my music selections.  And of course, this has been leading me to think of ways I can make your blog reading experience with me that much more sexually gratifying or you know, just good or something.  In that vein, I've found a way to take my weekly playlist to the "next level".  Seriously, I am so distracted by what follows these words and also slightly music horny about it, that I'm not sure I can type much more.  But kids, I am now using (drum roll please!)........a playlist that actually PLAYS samples of the music I'm recommending to you!  Aww yeeeeah, booyyyyy!!!  That's right.  Although I've pleaded for you to just "take my word for it because I'm Rob MF'ing Vera, the king of music", I will now attempt to back it up by giving you the ability to see if these playlists are as badass as I say they are (they are).  Listen.  Download.  Ignore.  Whatever.  You're welcome.  And I love you.  Here...we....go. 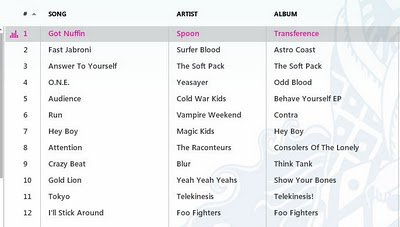 The Sunday Record: "In a Silent Way" by Miles Davis 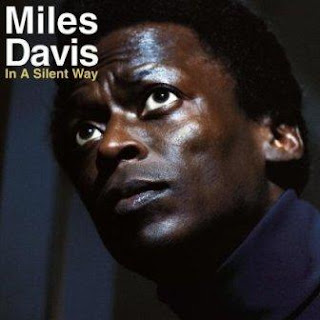 I could never look this cool in a turtleneck.  But if I'm being honest, I could never look as cool as Miles Davis in anything.
Album: In a Silent Way
Artist: Miles Davis
Year of Release: 1969
I tell my friends all the time that I don't know shit about wine.  I mean, I know I like the taste of reds.  I know also that I really couldn't taste the difference between a Merlot and a Cabernet.  I know that when my friend Zenie attempted to explain to me what "legs" are in reference to wine, I could see what she was looking at but couldn't explain why what I was seeing was significant.  I know I like to drink.  In short, I'm just another enthusiastic drinker who isn't armed with all the facts.  Luckily in our society, I am in the majority.
And so it goes with jazz.  I don't know shit about jazz other than that I know I love to listen to Miles Davis and I know his work sounds amazing.  Critics, musicians, and scholars have researched his work and his genius to a level I'm sure I have no interest in matching, so I'll keep the "academic analysis" out of this space.  After several glasses of wine last night (though I'm relatively hangover free today), something about Miles Davis sounded perfect for this morning and I ended up choosing In a Silent Way.  Let's quickly break down the album.  There are three, count'em THREE tracks on this album:
Side A: "Shhh/Peaceful
Side B: "In a Silent Way
"It's About That Time"
Side A is about eighteen minutes and Side B is about twenty minutes.  "Shhh/Peaceful" is an ambient mix of trumpet, organ, electric guitar, electric piano with a two-note bass line that goes on throughout (you'll hear the exact same bass line in a large portion of the Smashing Pumpkins space rock epic track "Silverfuck" from Siamese Dream).  It is frenetic, but never too rushed or too loud.  Listening to it, I get the sensation of flying over a city at night while still having the ability to observe the full scope of human activity--the hustle and bustle, the daily movement caused by commerce, etc.  Did that last sentence sound way too much like a York Peppermint Patty commercial or what?  "In a Silent Way/It's About That Time" starts with a slow burning swell of electric guitar and trumpet noise.  I read an interview once where Radiohead said that they listened to a lot of Miles Davis while recording OK Computer, Kid A, and Amnesiac.  Listening to In a Silent Way over and over, the influence of Davis on much of the fusion and guitar atmospherics of Radiohead's late 90's/early 2000's work becomes apparent.  The aforementioned slow burn sounds like a grandfather of thought to the Kid A track "Treefingers" and the influence of Davis' jazz fusion output can seemingly be found  in "The National Anthem" as well.  The remainder of Side B is a gorgeous ensemble of electric heat combined with brass and piano skill in an almost symbiotic meeting of the minds--which then concludes with the same slow burn found at the beginning of the piece.  With no lyrics to attempt to assign meaning to and no vocalist to critique, the listener is left with only his or her impressions on an emotional, audio-influenced level.  I'm struck by how much of what I hear sounds like the musical arsenal so many of my favorite artists fight with today.
In a Silent Way was Miles Davis' first major foray into jazz fusion.  Jazz and rock 'n' roll had maintained a largely segregated existence until the late 1960's.  But by finding a way to take the genius of each genre and combine them in a singular effort, the sound of music was changed henceforth.  That sounds epic and shit, eh?  Well, I guess it is.  Music like this found a new "way" forward--silent or not.  And on Sunday, it's proper to rejoice in whatever most inspires you, right?
The Non-Rob Review: All Music Guide
Posted by Rob at 7:48 AM 3 comments:

Not a full blog, but just the chance to call your attention to some good strong gold when it's found.  This is a new video from Spoon--one of my favorite bands who currently sit atop my ranking of all bands I love that I've never seen in concert.  They're from Austin!  How is this possible?  But I digress.  Unlike most music videos, this was recorded "live" meaning that it's not a simple lip sync from the album track.  Shot in black and white (I swear it looks like they snuck in to the Wilco documentary I Am Trying to Break Your Heart), note how they've elected to perform in front of mirrors.  The song is called "Written in Reverse", so this little visual trick is a not so veiled attempt to stick with the theme of the title.  However, it also serves to make this four piece look much larger and nearly tricks your mind into believing the sound is even bigger.  Of course, my simple mind is easily led astray.  This song is from Spoon's new album called Transference--an excellent album that I like to classify as a "grower".  I thought it was pretty good upon first listen, but its layers and clever nature have been revealed more and more with subsequent listens and I can't wait to get home to Oklahoma City today so that I can finally listen to it on vinyl.  Have a good strong weekend, kids.  Love you.  Now enjoy five good minutes.  You've earned it.
Posted by Rob at 7:30 AM No comments: 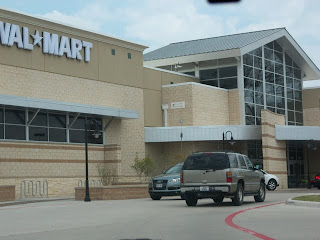 The color scheme of the Wal-Mart Supercenter is made to match all the other shops in my hometown which match all the other shops in all the other suburbs in all of America.
With apologies for my more infrequent posting, most of you understand I've had my reasons.  Mama is sick and first-born Robert needs to be home.  And so I'm home.  Sorta.  I mean, when I left this town nearly twelve years ago, it was already suburbia.  Since then, it has become "stylish suburbia".  Though I surmise that it's only stylish to those who feel that places like Southlake, Frisco, and Plano somehow represent some sort of white flight manifest destiny.  Anyway, I'm where I need to be, where I must be for a variety of reasons.  But it doesn't mean I'm not prone to missing all of the things about my beloved home in Oklahoma--most notably my friends.
Because I have to be around the house a great deal to care for my mother and stepfather, I can't get out much.  Which is fine since I only have a small, small number of friends in this area who actually will get out.  So I suppose the biggest change is that I'm alone a lot more with more time to think, read, write, etc.  The only problem is that I haven't been writing and reading nearly as much as I'd like and I've been thinking way too much.  So in lieu of many other options, I take a drive down memory lane as often as I can--almost quite literally.  Though much of the landscape has changed and morphed into suburban excess, I take my mp3 player and just drive.  Past my old high school.  Through the older parts of town.  Through my old pizza delivery routes that I've nearly memorized.  It's not like I necessarily love these places, but I do find the familiarity comforting in an uncomfortable time.
So for this week, I created a playlist of some of my favorite tracks I used to drive around to when I was in high school--so all are from 1998 and before.  These aren't necessarily my favorite songs of all time.  But they are an honest reflection of what I was listening to back then/what songs trigger memories about my life in the late 90's (honest meaning I may be slightly embarrassed by a couple of the selections, but I'm all about full disclosure on this blog, eh?).  Also, I extended the list from the normal dozen to seventeen because A) I am behind on weekly playlists and owe you, the devoted reader(s) oh so sweetly and forcefully and B) because I had a hard time only picking twelve.  So enjoy.  And think a good little thought for your good buddy Rob and his family.  Or a dirty thought.  Whatever suits you. 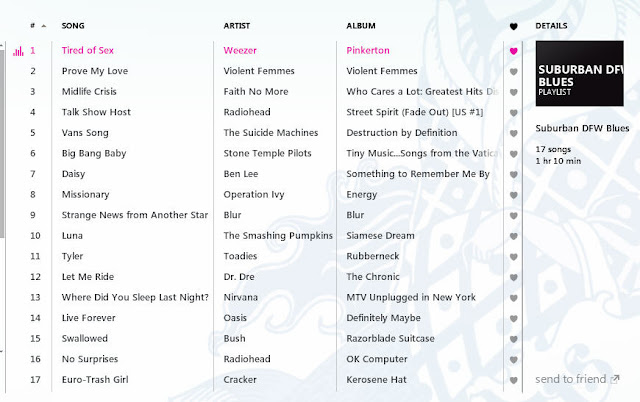