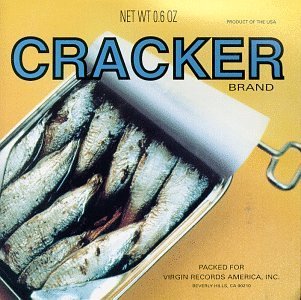 An album called "Cracker" by a band called Cracker and no crackers to be found on the cover.  Discuss.

Well everyone, I escaped Cincinnati last night just before God unleashed His wintry vengeance of doom upon southern Ohio.  Luckily for you, I'm alive to write my first installment of Music Humane Society Thursday.  Now for those of you who don't remember, the idea behind this is to highlight "old and new, classic and unknown, that you should just get because I said so and I don't ask you for much."  For the first time out, I've decided to lean more to the "unknown" category with what I think is a long forgotten, possibly unheard of album for many of you that in the age of the internet is easy to find and download.  So if I can sweep the cobwebs out of my brain that resulted from that loud Mexican (I mention this because they sang in Spanish and I heard them talking about home) family with the baby that they allowed to freely shit in his diaper for the entire two hour flight from Cincinnati to Memphis even though we were on a small regional jet and they had little or no regard for anyone else on the plane especially those of us who just wanted to listen to their music and fall asleep peacefully but no, that fucking smelly kid just kept shitting and crying and they did nothing about it except for sing and laugh louder and suddenly my liberal principles about immigration were suddenly challenged by the smell and sound alone all while my resolve regarding whether babies should even be allowed on planes was strengthened, then I can go ahead and start.  Yeah.

For Fans of: Rock with a little country mixed in, strange but clever lyrics that aren't quite as enigmatic as Pavement or early Beck but still cause you to to admire the poetry, lovers of odd but beautiful songs

Cracker is a band that almost all of you have heard but that almost all of you don't know the name of.  Their most commercially successful album was the brilliant Kerosene Hat which contained the lead single "Low" (To be with you girl, is like being low.  Hey, hey, hey, like bein' stoned!)  That may or may not jog your memory, but I have faith you can find it online.  You're smart kids.  Anyway, just as I was getting into what I refer to as my "good music phase" at the age of thirteen, Cracker was one of the first bands post-Nirvana/Seattle that I was introduced to by my best friend's older brother (who I referred to in a previous entry as the "cool older brother").  Cracker is in some ways just great rock music, but the band distinguished themselves with a little tinge of country thrown in (at the time I didn't know that rock and country co-existed) and most importantly by the SONGWRITING.  The group's frontman, Dave Lowery (formerly of Camper Van Beethoven) knew how to say clever fucking things using strange references to things I had no clue about--which for a teenager discovering new music was a huge plus.  With song titles like "Teen Angst (What the World Needs Now)", "Can I Take My Gun to Heaven?" and "Don't Fuck Me Up (With Peace and Love)", Cracker always knew how to be weird and artsy and cool--all while still ROCKING.  A random sampling of lyrics from this album alone to give you an idea of what I mean:

"On a hot desert night, the caravan stops at the oasis next to your heart..."

"What the world needs now is a new Frank Sinatra so I can get you in bed..."

"Now here I am, I am the game warden of love.  'til someone took away my gin and tonic..."

So do yourself a favor and take a peek into the world of Robert at 13 (without the uncomfortable puberty and angst) and give Cracker a try.  There's rock, beautiful ballads, and just enough of that something ensures that no matter how you feel about the record, you won't forget it.  With moments of beauty and odd magic, I don't think you'll regret the warm, drunk, brainy feeling that follows.


Non iTunes MP3 link (though it's definitely on there): Amazon