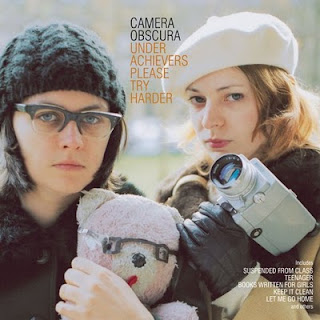 The resemblance blew my mind a whole lot, too.

Song Playing at the Beginning of Entry: "Teenager" by Camera Obscura

In my defense, I had heard of them and heard them before I saw it.

Today's "Sunday Record" is by Camera Obscura.  "Underachievers" is an album that came out six years ago, but one I didn't discover until last year.  The album is full of beautiful, melodic, tiny little pop songs.  Camera Obscura has been and will be endlessly compared to their Scottish counterparts, Belle & Sebastian.  And I will say that if you've ever enjoyed B&S, you'll probably enjoy Camera Obscura.  But the reason the edge goes to Camera Obscura for me is lead singer Tracyanne Campbell.  Her voice is soft and inviting while never seeming weak.  She's sarcastic and sharp while never making you think she's a bitch.  Ok, maybe a little.  But I've always been a sucker for that kind of girl, eh?

Which brings me to the odd, mindfuck way that this album came to my attention.  Again, I'd heard of Camera Obscura before I got this record.  I heard it in passing on Pandora or some other internet radio source the way that any of us do.  We hear a song or a band and we casually think, "That's pretty cool, I'll check it out."  And sometimes we do and sometimes we don't.  Bottom line, I wasn't "dying" to get a Camera Obscura record.  But one day while shuffling through records at Guestroom I came across this album.  And that album cover.  For those of you who have known me for a long time--say prior to 2005--you'll recognize my ex-fiancee's doppelganger on the left side of that picture.  The aforementioned Tracyanne Campbell.  Fuck, the resemblance is creepy.  Those of you who know, know.  Those of you who don't, trust me.  Anyway, I couldn't help it.  I bought the album.  The same part of us that rubbernecks at a traffic accident or can't help but press the red button or knows they should change the channel when "Jersey Shore" is on but doesn't took me over at that moment.  I wasn't sure I'd even like the album, even if I had a vague recollection of who Camera Obscura was.  I only knew that I didn't want that album cover staring at me every time I came into the record store, imploring me to take it home or else continue to be haunted by the ghost of my ex (who is alive, just so you know).  It's almost like I felt by buying the damn record, I was taking control of the situation.  So I did it.  And it was done.

Good news?  The record turned out to be amazing and an absolute comfort I never could have anticipated.  It's funny how we stumble upon gems sometime.  Especially gems covered in evil disguises.